Last weekend, I performed with Callie Chapman’s Zoe Dance Company at Studio at 550, as part of Cambridge Open Studios. Since people checking out the citywide event would be wandering in and out all day, Chapman designed a 40-minute looped structure that we cycled through continuously from 2-6pm. Our set included movable scrims hung from the ceiling around the space; digital projection on 3 walls as well as the floor, a soundscape managed live by Christopher Konopka, and a projection of actor Tim Mateer, who was Skyping in live and improvising spoken text. 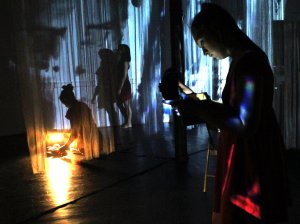 Each dancer (4 of us) had a solo moment (related to one of the four elements, as well as the stages of transformation – nothingness/contentment, seeking, having, and letting go); we also had designated ‘tasks’ to do during our downtime in between. For all of us, this included walking the perimeter of the room. My other task involved a step ladder with a bowl of water placed at the top. Other sections had handheld lights, a pile of rocks, a projector, clothing, etc.

In this very dense space, we worked continuously for four hours. This blew my previous performance time record out of the water, and was an experience I was not quite prepared for!