My first film project has officially wrapped up the shooting phase! We got everything done over two days on set – not bad for a 20 minute film!

This was a very different process for me both as a dancer and choreographer. My co-dancer Carolyn and I appreciated the luxury of being able to do multiple takes of our sequences until we felt just right (if only live performances were that way!); but also struggled a bit with narrative build. In a live, continuous performance, you have time as a performer to settle into your role and actually create a real internal experience or “ride” for yourself throughout the piece. Here, where we were shooting relatively short scenes, often out of order, it was a challenge to mentally and emotionally put ourselves into the state required of the narrative. 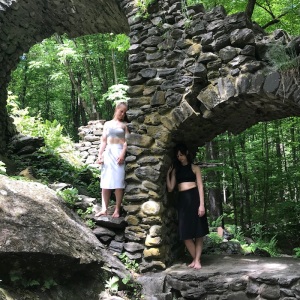 Designing the flow of the film also presented a challenge for me as a first-time film choreographer. I tried to include scenes and choreography that set up our characters and relationship; presented both strong imagery and movement sequences; and that built to a climax. My director Christopher Di Nunzo and I surprisingly largely stuck with what I had originally sketched out (a little color coded Excel sheet), with a couple additions and rearrangements after the first shoot day. Obviously it remains to be seen how it’ll turn out post-production, but fingers crossed the flow works the way we’re picturing it will!

I really enjoyed designing and getting to play with pure imagery here – something that would fall flat or look underdeveloped in a stage performance could actually be incredibly powerful on film, either through repetition or close-up perspective. For example we did things as simple as tossing our heads back in a canon, and having Carolyn slowly walk behind me across the screen as I unknowingly stare ahead – simple images that shot in closeup and flashed across the screen at strategic points sequentially can strongly impact the viewer. 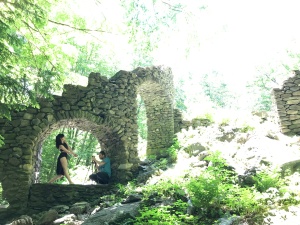 Our process for most of our sequences was to run our material, discuss where best to “perform” it within our set, then shoot it wide. Skip Shea, a colleague of Christopher’s and accomplished filmmaker in his own right, would make notes about moments he thought we should shoot separately/from a different angle/close-up/etc. and then work with Chris to supplement the wide master shot. Chris also did an amazing job taking the camera off the tripod and going hand-held to get right up in the action and even walk between the two of us as we danced apart spatially. 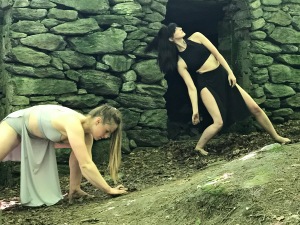 Beyond that, I was pleasantly surprised at how smooth everything was! Everything from the long drive (partially on unmarked dirt roads with no cell service) to hikers coming through the set, to taking care of our bodies while dancing on stone over long days – it all worked out fine. Kids would come through with their parents and say “Look, a show!”, dogs would run behind us but never actually ruined a shot in progress, there was broken glass all over the place but we somehow never got cut (..miraculous), and we didn’t even get eaten too badly during black fly season!

Next up, I’ll be working with Chris as he dives into the editing process. After a first cut is put together, we’ll be sending it to Josh Knowles so he can compose and record a soundtrack. Then we’ll be releasing trailers later this summer and premiering the full film in the fall! Stay tuned for screening dates!